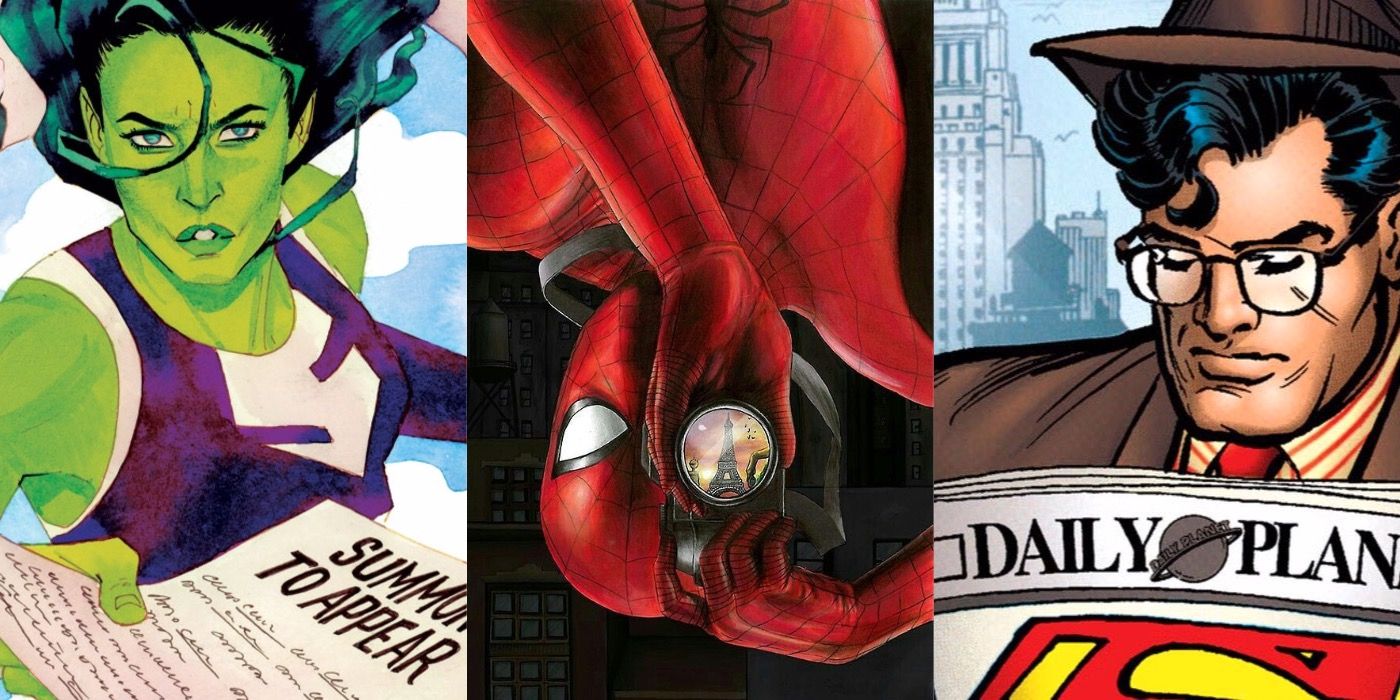 When not fighting crime, many superheroes find that they have to work regular jobs to pay the bills. While some heroes have over-the-top occupations that fit their exciting lives, others turn to more traditional work to escape the chaos of being a superhero.

Whether it’s Scarlet Spider’s turn as a barista or Daredevil’s long career as a lawyer, it seems a wide variety of professions are well represented in the comic book medium. In some cases, the heroes use the skills they acquire during their careers to become better crime fighters.

Despite being a clone of Peter Parker, Ben Reilly was determined to make his own life and control his own destiny which was separate from Spider-Man. Going by the nickname Scarlet Spider, Reilly naturally took to crimefighting, though he did it his own way.

Unfortunately for Reilly, he soon learned that being a wall-crawler doesn’t put money in his pocket, and so he got a job. Starting out as a Daily Grind customer who couldn’t pay, Ben was cleared to work on his tab and impressed enough to earn himself a full-time gig. Although her career as a barista was short-lived, she showed her ability to adapt to any situation.

Before being rebooted in the New 52 universe, Guy Gardner had bounced from career to career looking for a job that would bring out his best qualities. Prior to being a member of the Green Lantern Corps, Gardner tried his hand as a social worker caring for ex-convicts.

Attempting to rein in his own trauma-related anger issues, Gardner found that his career as a social worker didn’t fit his personality, and he moved on. While Gardner is generally characterized as an angry person who goes on a rampage, his career goals show that his emotions are in fact in line with the Green Lantern Corps.

While superheroes are sometimes seen as vigilantes, sometimes they have a good relationship with law enforcement and may even have careers in the field. Barry Allen took over the mantle from The Flash, and despite being a speedster, he continued to work in his day job as a medical examiner.

Beginning in the Silver Age of comics, Barry Allen’s version of The Flash has changed significantly over the years, including his career, which has taken a step back. However, when working, Barry would often use his proximity to law enforcement to bust criminals who threatened Central City.

Being under eighteen when his powers first manifested, Mark Grayson was caught between his budding superhero career and life as a college student. Many students struggle to juggle school and social life, and Mark had the added difficulty of being the hero Invincible while living in his father’s shadow.

One of the best parts of Invincible This is how Mark’s personal life intertwines with his fight against crime. Blending elements of teen drama with classic superhero action, the stories told in the comic contain interesting emotional depth. Many of Mark’s toughest challenges come from his student career, despite the fact that he also battles super-powered villains.

Over the years, Wonder Woman has been seen as an empowering female figure in the comic world. However, his standing among the other heroes wasn’t always the most flattering, and at first it was downright odd. Shortly after her debut, Wonder Woman joined the Justice Society of America and served as the group’s secretary.

Although she is a powerful heroine on the same level as her contemporaries, she was unfortunately forced into this position because she was a woman and failed most of the missions. Luckily for Wonder Woman, she’s taken on a bigger role over the years, and she’s become a leader in her own right within the ranks of the Justice League.

Unlike her cousin Bruce Banner, Jennifer Walters received a much milder form of the Hulk’s affliction when he gave her an emergency blood transfusion. Because of this, she is able to control her powers more effectively and balance her life as a superhero and a lawyer.

She-Hulk is an exciting action comic with extremely powerful villains, but it’s also a parody of comic books in many ways. Frequently breaking the fourth wall, Walters is never afraid to wink and nod at the audience on occasion. Her career as a lawyer is also a parody of classic comic book cliches, as she gave her main character a seemingly boring day job to contrast her life as a hero.

wild dragon is undoubtedly one of the best Image Comics series of all time, and its longevity is proof of its importance. Debuting as one of Image’s first books in the early 90s, The Dragon still appears in monthly issues today, and it still balances both careers as a cop and a superhero.

Unlike most other heroes with a job, the Dragon’s two career paths are inextricably linked. Having no secret identity, The Dragon makes good use of his superpowers when on the beat. Often, he protects Chicago from an onslaught of “Super Freaks” along with other members of the force, whether they have powers or not.

Superman is an instantly recognizable figure in the comics, and his secret identity as Clark Kent is just as beloved as his super alter-ego. Famous for being a mild-mannered reporter at the Daily Planet, Clark often uses his superpowers to get the inside scoop on other reporters.

Clark’s position also helps him be at the crime scene without looking suspicious, and no one looks twice at Kent because he’s always where Superman is. Interestingly, Clark’s talents as a journalist also come in handy in his crime-fighting, and his journalistic wit has helped him solve mysteries as Superman.

As well as being a wall-crawler and web-slinger, Peter Parker is also known for his tremendous talent for photography, which has earned him frequent work at the Daily Bugle. By submitting the highly sought after photos of Spider-Man, Parker has found a way to line his pockets and stay close to breaking news.

Although Parker also pursued a career as an educator and scientist, it is his time with the Bugle that is synonymous with his character. Besides being super powerful, Parker has often been shown to be one of the smartest superheroes because he is able to monetize his crime-fighting.

Matt Murdock, also known as Daredevil, has shown his dedication to protecting people not only through his crime-fighting, but through his craft as well. A lawyer by day and a death-defying hero by night, Murdock’s business was usually tied to the villain he was fighting.

While most heroes often wander away from their occupations as their crime-fighting lives take over, Murdock’s practice has always been an integral part of his character. Never afraid to show his toughness in the courtroom, Murdock’s life is dedicated to protecting the innocent, and he has found more than one way to serve his community.

NEXT: 15 Coolest Superhero Slogans Of All Time, Ranked

Superman’s Evil Doppelgänger Has A Disgusting Way Of Defeating Him

Dalton is a freelance writer and novelist from Orlando, Florida. He currently lives in Los Angeles and pursues writing full time. He is an avid reader and cinephile.

Atlassian adds “Compass” and “Atlas” for developers and collaboration teams