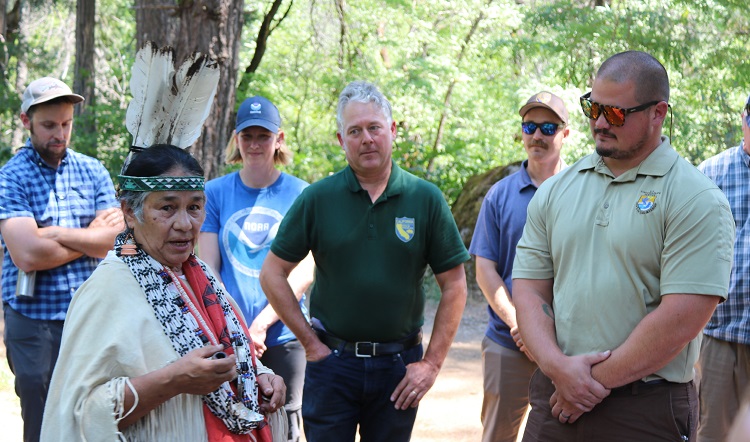 The Winnemem Wintu Tribe, the California Department of Fish and Wildlife (CDFW), the National Oceanic and Atmospheric Administration (NOAA) Fisheries and the U.S. Fish and Wildlife Service (USFWS) celebrated the return of endangered Chinook salmon eggs on Monday. the McCloud River upstream of Shasta Reservoir for the first time since Shasta Dam was built in the 1940s.

The partners collected approximately 20,000 winter-fertilized Chinook salmon eggs from the USFWS’ Livingston Stone National Hatchery near Redding and drove them over three hours 80 miles to the Ah-Di- Campground. Na in the Shasta-Trinity National Forest on the shores. of the McCloud River. The eggs were placed in specialized incubators along the cold waters of the McCloud River where the species once spawned. Another 20,000 eggs will be transferred to the McCloud River incubators in early August. Both cohorts will be released into the river as fry.

The historic return of Chinook salmon eggs wintering up in the mountains above Shasta Reservoir is an urgent response to reduce the risk of extinction in a third year of severe drought. It is not a species reintroduction program. The action of the drought, however, should inform future recovery and long-term reintroduction efforts as biologists learn how the species uses its historic habitat. Once the eggs hatch later this summer, salmon fry will swim in the McCloud River for the first time since the construction of the Shasta Dam in the 1940s blocked the migration of adult salmon to those same mountain waters. Rotating auger traps in the river will collect the salmon fry, which will then be transported downstream from the Shasta Dam and released into the Sacramento River to migrate to the Pacific Ocean.

The return of winter Chinook salmon eggs to the McCloud River was accompanied by a tribal celebration by the Winnemem Wintu, who have long advocated for the return of salmon to their ancestral homeland. CDFW staff and tribal representatives will camp next to the incubators and monitor the eggs and young salmon as they grow and disperse in the river over the next few months.

“We ask that the river receive these eggs. We ask that the old ways continue and grow that way,” said Chief Winnemem Wintu and Spiritual Leader Caleen Sisk as he explained the native lyrics, songs and ceremony immediately preceding the return of the eggs to the McCloud River. “We put this song on so they have a fighting chance.”

CDFW Director Charlton H. Bonham said: “While we have taken a number of different actions to help this iconic species through another year of drought, there is no denying that Monday’s work just seems huge. It’s historic and healing and incredibly hopeful for the future. We are very grateful for the wisdom and guidance that the Winnemem Wintu Tribe provided on their ancestral lands and waters, which helped shape this effort. We are proud to help deliver these eggs and this species to the McCloud River House.

Scott Rumsey, Acting Regional Administrator of NOAA Fisheries West Coast Region, said: “Given the drought and the stark reality of climate change, these endangered fish face the longest chance of they have ever known. The Winnemem Wintu tribe has long sought to bring them back to the McCloud. This crucial collaboration with tribe, state, and other agencies now reflects more support for the species than ever before and finally takes an important step towards making it happen. »

Paul Souza, regional director for the USFWS Pacific Southwest Region, said, “We know the effects of drought can have devastating effects on some of our most precious aquatic species, but it is comforting to knowing that when we come together with our partners, we are able to quickly accomplish lifesaving measures like this for the winter Chinook. We are proud to work with such dedicated federal, state and tribal partners to help protect this endangered fish from drought through the implementation of creative solutions.

Photo information: Caleen Sisk, Chief and Spiritual Leader of Winnemem Wintu, is joined by CDFW Senior Environmental Scientist Matt Johnson and Taylor Lipscomb of Livingston Stone National Hatchery on the banks of the McCloud River as winter chinook salmon eggs are returned for the first time since construction. of the Shasta Dam in the 1940s.

A sad farewell to our human search engine