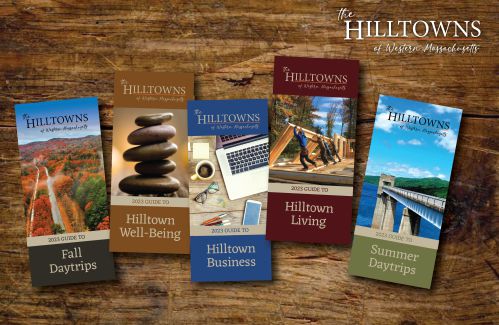 CHESTERFIELD — The long-running business directory sponsored by the Hilltown Community Development Corporation as a way to promote businesses in the Hilltowns is entering a new era this fall — a digital era.

Since the 1980s, the Hilltown CDC has published a large paper directory that it has sent to thousands of households. Now, after a hiatus in distribution due to the COVID-19 pandemic, the directory is going digital-only, supplemented by a number of seasonal brochures.

“It was very expensive to produce,” said Hilltown CDC executive director Dave Christopolis. “In the end, we decided what we do now.”

The CDC also tested its ideas for promoting the Hilltowns as a distinct and cohesive place to “eat, live, and play,” which received favorable responses that Christopolis said made them more confident about what they were offering. .

While the Hilltown CDC has had an online directory for years, Christopolis called it “lame” due to internet connectivity issues.

However, with most Hilltown residents now having broadband access, the decision was made to invest and center the directory online.

Businesses can pay to be listed in the online directory, and Christopolis said they will have more control over their online listings.

“We will continue to focus on attracting people to the area,” Christopolis said. “You could spend a whole day in the Hilltowns and really have your every need covered.”

Christopolis grew up in the Berkshires, and he noted that the Berkshires and the five Pioneer Valley colleges have become destinations, while the Hilltowns are “generally left out”.

In order to help change that, Christopolis said the Hilltown CDC will be releasing brochures themed around seasons and industries. The fall brochure, the first in this series, focuses on farm stands, tourism, apple picking and fall foliage and will feature 55 businesses.

He also said that the next brochure will tentatively focus on entrepreneurs.

“They are an important part of our business community here,” Christopolis said.

Christopolis noted that the directory was being sent to all households in the Hilltown area, with the last directory being sent in 2019. He said the brochures, in the meantime, will be distributed to key locations, such as libraries and advice on aging. Individuals can also request to be sent by mail.

The pamphlets will also be distributed in the Five Colleges area and the Berkshires through a pamphlet distribution company.

The cost of being included in the online directory is $100 per year, which also comes with a brochure listing. For $150, a business can be listed in the directory and listed in two brochures.

“Our main goal is to support our local businesses,” Christopolis said.

One of the companies that has embarked on this effort is the Williamsburg General Store. Founded in 1977 by husband and wife David and Carol Majercik, it remains housed in a 19th century building in downtown Williamsburg.

“This business, this store, is close to their hearts,” Majercik said, speaking about what his customers tell him. “It just makes people feel good.”

Majercik now works for his daughter Heather, the store’s current owner, and he said the store has joined the online directory and will appear in fall and summer brochures.

“The CDC is a very nice outfit,” he said. “We have been with them for a long time.”

He also said the store is looking to do more online and what the Hilltown CDC is doing should really expand its presence.

Another business that will feature in the fall directory and brochure is Oliver’s Farm Stand in Goshen.

“All publicity is good publicity,” owner Ruby Hutt said. “It was just a smart choice.”

Hutt said the print directories remained on his shelf after he received them, and an online directoryis a “more useful resource”.

“People are going to come out,” she said.

Hutt also said she would push the directory and her company’s place in it.

“I hope people will use this resource,” she said.

Bera Dunau can be reached at [email protected]