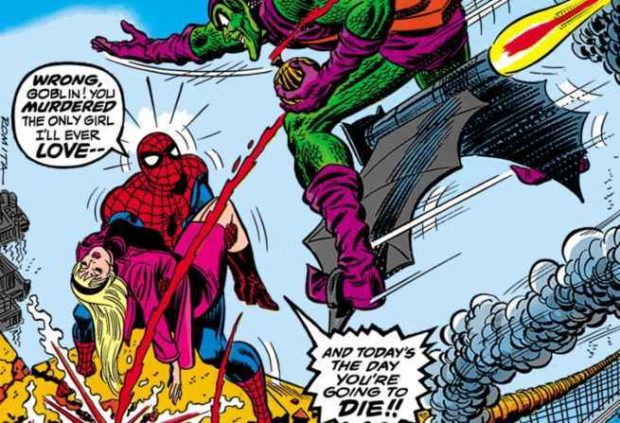 I’m writing this straight off the top of my head as I went into reflective mode after watching “Spider-Man: No Way Home”, which I’ll be doing a proper movie review on very soon, as only I can tell. To do. In the meantime, I feel like my attention has been drawn to the original Green Goblin and how beautifully it was performed once again by veteran actor Willem Dafoe. Now this time, I’m going down the Marvel Comics Road in this final column.

Green Goblin will always be the greatest supervillain Spider-Man has ever faced as he was the one who killed Gwen Stacy who was Peter Parker’s first true love before he eventually fell in love with Mary Jane Watson.

This slow-motion preview camera shot in a scene in which a damsel in distress falls from the edge of a building or skyscraper repeatedly seen in movies and reenacted in “Spider-Man: No Way Home” was first seen and copied into the pages of an issue of “The Amazing Spider-Man,” in which Gwen Stacy plunged into her death and changed Peter Parker’s life forever soon after.

For me, it was a point in time for all Marvel comic readers when we first saw what happened to Gwen Stacy because of the Green Goblin. You talk about legendary or in this infamous moments in “The Amazing Spider-Man”, this one was the most tragic, most disturbing and most painful for the web crawler to lose his loved one.

But beyond that, there are a number of other reasons why the original Green Goblin is Spider-Man’s greatest arch nemesis, which I’ll mention below.

The original Green Goblin was not only a physical and technological threat, but most importantly, he was also a psychological threat to Spider-Man. He was very intelligent, cunning, deceptive and manipulative. Literally, he was ahead of Spider-Man when it comes to mental warfare because of those traits of their deadly feud.

Often times, Peter Parker would wonder each time before donning his spider costume what the Green Goblin was trying to do before their fights. The original Green Goblin was the master of villainy in all its aspects.

The original Green Goblin was as close to the Joker’s equivalent as it was to a Batman in Spider-Man lore. Complete with his own iconic manic laugh! Although they sounded similar, they were totally different tonal.

The original Green Goblin has been dead for a long time, in fact, decades already in Marvel comics.
Yet his infamy in the pages of “The Amazing Spider-Man” has never wavered, and has not been completely forgotten over time. No matter how many times in recent memory they have tried to reconvert or reimagine the Green Goblin to meet the ever-changing tastes, perspectives and moments that we now have in society, the original, the one whose l he secret identity is Norman Osborn, may never be replaced, repeated or duplicated for his villainous ways.

As a child, the original Green Goblin was the only â€œThe Amazing Spider-Manâ€ supervillain in Marvel comics whose Halloween-esque comic book design has always marked me. He was truly an embodiment of everything that is described as bad in the Marvel Comics for the way he was designed. To this day I still have the Fleer Series 2 Marvel Trading Cards in my possession, and one of the rarest cards I have in my treasured collection that is now impossible to find is the Original Green Goblin. . On top of that, I only have two of his appearances in â€œThe Amazing Spider-Manâ€ when the series was drawn by legendary comic artist John Romita Sr. during the Silver Age of Marvel Comics.

For someone remembered for doing bad deeds, the original Green Goblin is high among Spider-Man’s rogue gallery, and its infamy only grew over the following decades in various forms. media, and as clearly shown in “Spider-Man: No Path Home.”

Multiversal playfulness and possibilities were created in “What if …?” “From Marvel

Leaving the multiverse free, ‘Loki’ prepares the MCU for a much more wacky and chaotic future

The hottest entertainment news straight to your inbox