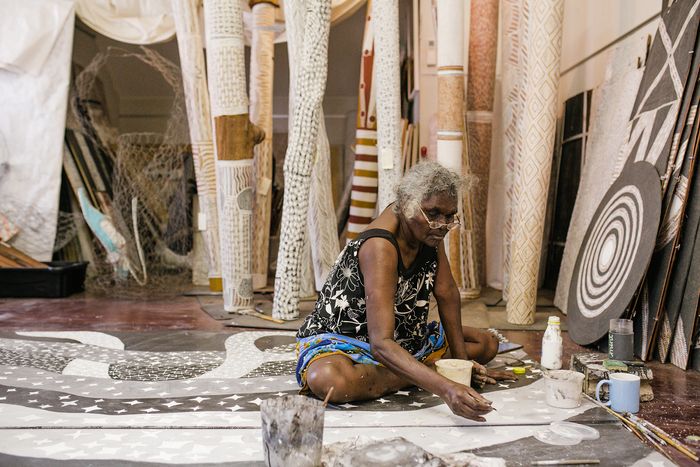 Of course, part of my thinking is shaped by the questions I’ve posed recently about the presentation of First Nations art in our home – in particular, why it took the Kluge/Ruhe Museum in Virginia, USA , to deliver the three most significant exhibitions this year – tackling the 50th anniversary of the Papunya Tula Artists company twice and 80 years of Yolngu bark from Arnhemland in a single exhibition that will tour America for several years. And why no Australian institution has achieved anything comparable.

Let’s start at the top! ‘MADAYIN: EIGHT DECADES of Australian Aboriginal Bark Painting from Yirrkala’ features works of art largely unknown in the United States. While recent decades have brought to light the “dot paintings” made by Aborigines in the western deserts of Australia, these works from north-east Arnhem Land in the Northern Territory of Australia – also patterned, abstract, sometimes figurative, but visually very different – ​​had much less exposure”.

This is how Judith H. Dobrzynski begins his review of the Wall Street Journal screening in Dartmouth, New Hampshire before it even officially opens next weekend. She continues, “As the wall texts explain, the artists are of the Yolngu people, and their paintings are considered part of the family, part of a kinship system called gurrutju and bound by raki, which connects land, sea, plants and all creatures. Within the Yolngu relationship system are two complementary groups, called moieties, and people must marry someone from the other group. When making art, each clan uses its own miny’tjidesign traditions that date back millennia and are considered Madayeen – both sacred and beautiful”.

I quote at length because I wonder how many national Aboriginal art journals would bother to enter this complex world that is so integral to the creation of these works. Funnily enough, I came across a delicious attempt last night as Byourarra singer/songwriter Ursula Yovich interspersed her performance at Sydney’s Ensemble Theater with an explanation of gurrutju! And yes, the Tarnanthi exhibit two years ago which had some of Dartmouth’s barks before they left for America also touched on the gurrutju, but how many reviews have bothered.

Do you love hard work too much? Dobrzynski doesn’t care: “Perplexed? Do not worry. While these and other concepts are central to Yolngu art, curators offer help. Noting that they share the paintings to provide an understanding of their world, Wukun Wanambi – a recently deceased artist who was part of the exhibition’s large team of curators (mostly Yolngu) – states in the opening text of the wall “Like the surface of water, underneath is an ocean of knowledge. We can only show you the surface.

But…. “The surface is spectacular. Ranging from 19 inches to 12 feet in height, these vertical paintings are rendered almost entirely in natural tones of white, ocher, gray, brown, beige, and black. Their fascinating designs draw in viewers and their meanings, however inscrutable, make observers wonder and linger.”

Dobrzynski even searches for the deeper motives that lead him to question the timing of this burst of artistic production during the 1980s: “The rights of the Yolngu to their ancestral lands were particularly threatened, by mining interests, political of assimilation, the wars. Believing that their art is the most powerful way to document that they have lived on their land since the dawn of creation, they chose to show and sell it to Westerners to spread this message, and Yolngu curators had these contentious times in mind”.

It is an embracing review that has certainly justified the multi-year efforts of Yolngu curators. How often do they feel this in Australia I wonder?

For I’d be pretty confident that Robert Andrew, the Yawuru/Blak artist whose language-based works using high-tech equipment seem to be on every major Australian First Nations show these days, would be less than happy with the Christopher Allen’s review of his ongoing MONA show in Hobart. The Australianart critic has a habit of contextualizing the shows he reviews with up to 50% scholarly background information before reaching art. Her context here is her doubts about Dr. Andrew’s decision to self-identify as Native when his ancestry only contains a great-great-grandmother who was Yawuru.

But Allen doesn’t recognize the word “identify,” which is the choice made by many contemporary blak artists of mixed ancestry. Not just artists. The recent census shows there was a 25% increase in the number of people identifying as Aboriginal and/or Torres Strait Islander in 2021, from 649,171 in 2016 to 812,728. was recorded in Victoria, where the jump was 37.4%, rather than in the Northern Territories where the Aboriginal population increased by only 5%. Surely this suggests that more people are choosing to self-identify.

Which is not the same as Allen’s odd expression, “a kind of racial mysticism”, which is how he interprets the choice “which makes a particular genetic component decisive and all-defining”. And is his judgment of Andrew’s art any kinder? “In reality, he is engaged in what he himself considers to be a kind of archaeological quest for the vestiges of his own past, long obscured by the passage of generations and a process of voluntary forgetting”?

by Robert AndrewIn a statement‘ is at MONA in Hobart until October 17, when, presumably, Palawa Kani’s words he borrowed will finally be mechanically revealed.

Finally, we come to Sharp review of John McDonald’s Sydney Morning Herald of the current National Gallery/Wesfarmers First Nations Art Touring Exhibition in Singapore – until this weekend only. He begins by noting the omnipresence of Aboriginal art today in the international sphere, compared to only 20 years ago. But continues: “I found myself thinking about these issues after I was finally able to see Ever Present: The Art of Australia’s First Peoples, at the National Gallery in Singapore. With over 170 works by 150 artists, this is the largest display of Aboriginal art ever seen in a museum in Asia.

But… “I felt that the major drawback of the selection was that it was too heavily loaded with photography, video and activist art, to the detriment of pieces with more aesthetic and spiritual power. For example, it was surprising to see no less than three works by Vernon Ah Kee, but not a single piece by an artist such as Guynbi Ganambarr. The inevitable Richard Bell was represented by a massive painting from the Wesfarmers collection and the globe-trotting installation from the Embassy, ​​but there was nothing by artists as important as David Malangi, Mick Kubarkku, Jarinyanu David Downs, Eubena Nampitjin, Ginger Riley, etc. on. One of those blue boats from Dhambit Munungurr would have caused a sensation.

“I know it’s good policy to review the works in the exhibition rather than those one would have preferred to see, but the main point is that the selection felt skewed by political considerations. This extends to NGA curator Tina Baum, who writes her catalog entries and wall labels in the first person plural as if speaking on behalf of all Indigenous peoples.

And, given that it’s a promotional effort for Australia, “it’s an eerie sight that makes it seem like the Aborigines are in perpetual conflict with an oppressive white state.” There are so many things that we can learn from indigenous society in terms of tolerance, sharing and respect for the land, that it would have been desirable to put more emphasis on these aspects”.

I regret to say that my ties to SMH and The Australian are behind paywalls, but The Wall Street Journal seems generous enough to share with the world!

Incidentally, in 2011 when MONA first opened, I toured with founder David Walsh and naturally asked him why there was a complete lack of native art. His response was fascinating: “The cornerstone of Aboriginal art is the phrase, using a series of commonly referenced symbols. We haven’t had that in the West since the Renaissance. There are three ways to create a written language: using an alphabet, using syllables, with a symbol for each, and using pictograms or logograms like Chinese. The symbolic level in Aboriginal art is more at the level of the first two, whereas Western art today uses logograms. In other words, Aboriginal art is more sophisticated – and I just need to know more to understand that”.

This understanding is significant. It should have a broader motto and be debated (I noted this in 2011); and may indeed lead to the appearance of Aboriginal art at MONA. Now it is!