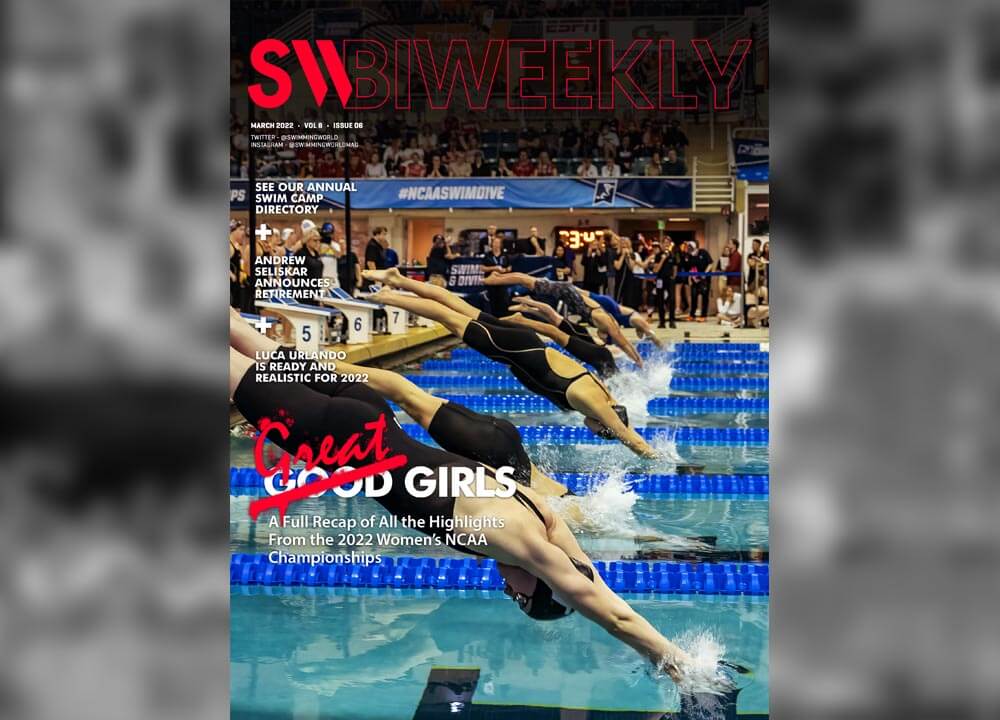 Non-subscribers can download this issue heree- only $0.99 for a limited time!

30 Day Membership to ISHOF and Digital swimming world Subscription for only $10 per month!

Non-subscribers can download this issue heree- only $0.99 for a limited time!

CHARACTERISTICS OF THE PROBLEM

008 AFTER TESTS, DISEASE RETURNS, LUCA URLLANDO IS READY AND REALISTIC FOR 2022
by Matthew DeGeorge
Luca Urlando has surpassed his years learning to deal with adversity – a disappointing summer of 2021 and more than two weeks out of the water in the fall with the flu and an emergency appendectomy. So the future 20-year-old is realistic when it comes to setting his goals for 2022 at the NCAA and hopefully the World Championships this summer.

010 ANDREW SELISKAR ANNOUNCES HIS RETIREMENT AFTER COMPETING AT TOKYO OLYMPIC GAMES
by David Rieder
Long-time U.S. national team star Andrew Seliskar has announced his retirement from competitive swimming. During his illustrious career, he was named Swimming World High School Male Swimmer of the Year in 2015, and he was an impact performer for Cal from 2015-2019 before qualifying for the U.S. Olympic Team. in 2021.

012 WHEN JANET EVANS SPENT A 4:03 OVER EIGHT LAPS TO LEGENDARY STATUS
by John Lohn
To mark International Women’s Day, Swimming World remembers the day Janet Evans clocked a stunning time of 4:03.85 in the 400m freestyle on a trajectory to the pantheon of greats.

014 BIG GIRLS
On the following pages, Swimming World shares many highlights from the NCAA Division I Swimming and Diving Championships, March 16-19, at Georgia Tech in Atlanta – a meet that featured records in nine of 21 tests and a dominant performance of the University. of Virginia to win his second consecutive national team title.

018 KATE DOUGLASS IS BUILDING A LEGACY AS ONE OF THE GREATEST COLLEGE SWIMMERS IN HISTORY
by Dan D’Addona
Virginia junior Kate Douglass not only showed her skill, but also her versatility, winning three individual races in three different strokes (50 freestyle, 100 flyweight and 200 breaststroke) – all in American record times.

019 ALEX WALSH CLOBBERS AMERICAN, NCAA RECORDS IN 200 IM TITLE DEFENSE
by David Rieder
Last season, Alex Walsh of the University of Virginia won the NCAA 200 IM title as a rookie. A year later and with an Olympic silver medal in the 200 meter individual medley already in her pocket, Walsh is now the fastest female swimmer in history in this event.

020 VIRGINIA CAPS OFF DOMINANT MEETS AMERICAN RECORD IN 400 FREE RELAYS
by David Rieder
Virginia capped off her NCAA title winning performance by breaking the American, NCAA and US Open records in the 400m freestyle relay. Kate Douglass, Alex Walsh, Reilly Tiltmann and Gretchen Walsh clocked 3:06.91, edging Cal’s previous all-time record of 3:06.96 in 2019 and smashing Stanford’s US record of 3: 07.61 of 2017.

022 KATHARINE BERKOFF PRODUCES FIRST 48 SECONDS 100 BACK
by David Rieder
In swimming one-on-one against Stanford American record holder Regan Smith, defending NCAA 100 champion Katharine Berkoff not only bettered the previous American record by nearly half a second, but she also became the first female swimmer to break 49 seconds with her jawbone. – fall time of 48.74.

023 KATE DOUGLASS CRUSHES AMERICAN AND NCAA RECORDS IN 200 BREASTS
by David Rieder
After winning the 50m freestyle and 100m butterfly, recording the fastest times in history in both events, Kate Douglass of Virginia did it again in the 200m breaststroke. Her time of 2:02.19 was 4 tenths faster than Indiana’s Lilly King US, NCAA and US Open records from 2018.

024 VIRGINIA’S GRETCHEN WALSH WINS FIRST NCAA TITLE AT 100 FREESTYLE
by Dan D’Addona
Before the competition, the 100 freestyle appeared to be a showdown between Maggie MacNeil of Michigan, the defending champion, as well as freshmen Torri Huske of Stanford and Gretchen Walsh of Virginia. However, with Mac Neil and Huske advancing to the B Final, Walsh won his first NCAA individual title with a performance of 46.05, fourth best all-time in the event.

026 REGAN SMITH EXPLODES LATE TO CRUSH ENEMIES FOR 200 BACKSTROKE TITLE
by John Lohn
Regan Smith, whose commitment to Stanford was postponed for a year due to the COVID-19 pandemic and the subsequent postponement of the Tokyo Olympics, finally won his first NCAA title – a victory in the 200 backstroke which is came with flair and drama. Initiating a grueling double in the final session, Smith used phenomenal turns at 150 and 175 to come from behind and win in 1:47.76 against defending champion Phoebe Bacon of Wisconsin.

027 PAIGE McKENNA OVERCOMES TWO REAR LABRUMS TO PUNCH 1650 FREE NATIONAL TITLE
by David Rieder
Paige McKenna of Wisconsin swam her lifetime best in the 1650 by over seven seconds to win the mile in 15:40.84 and become the 16th fastest in history. Her breakthrough performance and national-level emergence comes as she tries to overcome two torn labrums suffered when she was forced to face swimming pools closing during the COVID-19 pandemic two years ago. McKenna is still deciding whether she will have surgery to repair the tears.

028 TAYLOR RUCK COMES TO A SPECTACULAR VICTORY IN THE 200M FREE, CEMENTING THE ROAD TO COMEBACK AFTER EATING DISORDER
by Dan D’Addona
After weathering the pandemic with an eating disorder and a few disappointing years in the water, Stanford’s Taylor Ruck is back, as she put in a dominating performance to win the 200 freestyle, the women’s first individual championship. NCAA for juniors.

036 LIA THOMAS DEBATE: THROUGH INACTION, NCAA EXPLOITED A CIRCUS AT CHAMPIONSHIP COMPETITION
by John Lohn
Despite Virginia’s dominance as the tag team champion, the individual excellence of Kate Douglass and Alex Walsh, numerous all-American record-breaking performances, and the backside brilliance of Katharine Berkoff and Regan Smith, this year’s NCAA Women’s has sadly been defined by controversy, particularly the inclusion of transgender woman Lia Thomas.

038 REKA GYORGY, DROP OUT OF 500 FREE B FINAL, WRITES CRITICAL LETTER TO NCAA OVER TRANSGENDER RULES
by David Rieder
Virginia Tech swimmer Reka Gyorgy finished 17th in the 500 freestyle and was one berth in the consolation final in an event won by transgender swimmer Lia Thomas. Gyorgy wrote an open letter to the NCAA, saying she supported Thomas, but blamed the NCAA for the institution’s handling of the entire situation, including the rules. Swimming World shares Gyorgy’s letter in full.

Swimming World is now a partner of the International Swimming Hall of Fame.

To know more, visit us at ishof.org

Why NAP and User Experience are Crucial for Local SEO