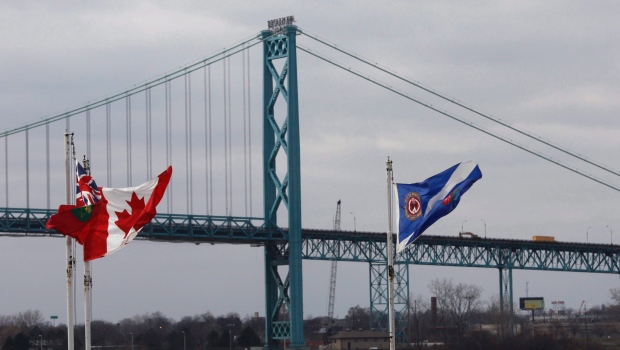 WINDSOR, Ont. – Limited traffic to the United States resumed on Tuesday morning through the Ambassador Bridge border crossing in southern Ontario after a protest against COVID-19 measures blocked two-way travel one day earlier.

The bridge connecting Windsor, Ont., and Detroit remained closed to vehicles heading into Canada due to the protest which continued on the Canadian side of the border.

“Limited traffic is permitted into the United States via the Ambassador Bridge,” Windsor Police wrote on Twitter just after noon Tuesday. “Officers are on site to maintain traffic points, public safety and law enforcement.”

Police said vehicles bound for the United States could use the Wyandotte St. West entrance. They noted that traffic along Huron Church Road, which connects to the bridge, remains congested.

Motorists were asked to avoid the area and take alternate routes.

The Michigan Department of Transportation said the Ambassador Bridge remains closed on the U.S. side. He advised those heading to Canada to use the Port Huron Passage, which connects that US city to Sarnia, Ontario.

The president of the Detroit International Bridge Company, which owns the Ambassador Bridge, called on officials to “take quick action” to resolve the situation quickly.

“International trade must resume,” Matt Moroun said in a statement, noting that the company and his family sympathize with truckers and others caught in the blockade.

“We recognize that truckers are essential workers who work hard to provide us all with basic necessities, and that the Canadian government has done a wonderful job with vaccination rates.

Ontario Premier Doug Ford said the Ambassador Bridge is a vital trade crossing point between Canada and the United States.

“Many essential workers, including frontline healthcare workers, depend on it to get to work,” he said on Twitter. “Police are on site to ensure traffic is proceeding safely.”

Ontario Provincial Police in Essex County issued a statement on Monday telling drivers to avoid the area and take the Bluewater Bridge in Sarnia if traveling to the United States.

Windsor police said more than 100 protesters remained at the protest scene on Tuesday morning. They said no arrests have been made and they continue to monitor the situation.

The protest is one of many in solidarity with similar protests in Ottawa and across the country regarding COVID-19 vaccination mandates for cross-border truckers and broader public health measures.

Protesters in southern Alberta resumed their blockade of the Coutts border crossing on Monday evening, where trucks and other vehicles began parking on the highway on February 5, stranding travelers and cross-border truckers for days .

This report from The Canadian Press was first published on February 8, 2022.